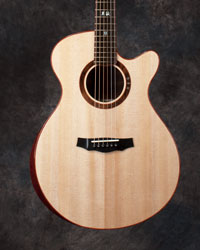 Early in his building career, Laurie discovered that among the various recycled timber he had collected there were some boards that sounded better than others, and a few that had an exceptional tap tone. Of these he built the first of his instruments with kauri soundboards, and they were received with great enthusiasm. But finding the right kauri was hit-and-miss and the difficulties were compounded further by the necessity for the timber to be quartersawn. However, with support and expertise offered from a local sawmiller with extensive knowledge of native species, the search began for a standing tree that would yield timber with the required tone. Their search eventually led them to Waingarara, and to private land that had several suitable trees. Approaching the land owner with some examples of his work, Laurie was given the go-ahead to select a tree. However, a project of this scale requires substantial financial resources and it was several years before the project finally got under way – through the generous assitance of a private investor, without whose help it would not have been possible.
From the tree, Laurie was able to select the quartersawn timber he required, while the rest would be retained for other uses. Currently the Waingarara kauri is cut into short billets and is air dried and ready or use. This Waingarara kauri now offers a steady supply of consistent stock for his instruments.
The tale of the process of discovery, all the way through to finished instruments, was captured on film for a feature documentary Song of the Kauri.

Feature Documentary: Song of the Kauri 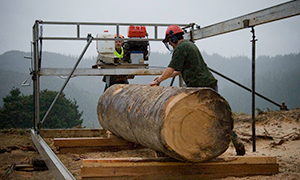